Skip to content
I think this is a pretty good effort for one week of non-concerted effort.﻿  A tension square was absolutely necessary, especially in helping to select colours.  I’d initially chosen yarn colours from a webpage.  When I knitted up the tension square, I could see that a couple of them didn’t have enough contrast with the main colour.  So I went for a deeper version of those colours, and they’re working out really well. 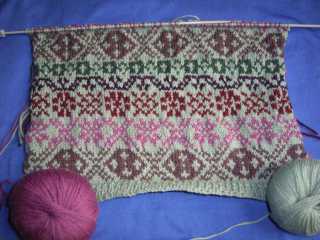 All of the fair isle patterns I’m using have an odd number of rows, so the new colour starts at one end, and finishes at the other end.  Odd numbers of rows and stitches do seem to look better in a lot of designs.  Maybe that’s a standard thing with fair isle; I don’t know.  I suppose this means the ends will be woven in evenly along both sides, but I’m finding it a bit annoying.  I was thinking that having all the ends at one side would mean I could tie them off against each other.
The rib band wants to flip up, so I’ve had to weight it down with a couple of balls of yarn for the photo.
Both the Abundance Pullover and the Leafy Squares Fingerless Mitts are coming to the end of their test phase.  I’m hoping to have more news on them soon.
Exciting news:  I’ve had a design accepted with a magazine!  I’ll have to contain my excitement until June, when it will be published.