The Lacy Boucle Clutch is virtually complete. I’m still waiting to hear when my magnetic clips come in. Now I’m starting to doubt whether they’ll be what I want. There were none of any size in the shop, so I couldn’t see how to attach them. Maybe you can’t sew them in. Maybe they need to be glued or some such thing. I suppose I’ll just have to be patient and wait and see. If they’re not suitable, I’ll probably end up using press studs, although I was trying to avoid the tugging on the fabric that they tend to entail.

I won’t publish the knitting pattern until it’s completely finished so I can photograph it in it’s proper state, and maybe have some contents in it without it gaping open. 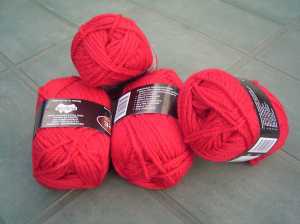 While waiting, I may as well go on with the next idea.

My thoughts are to do a bag with a lace border at the top.
Yesterday I went in to Morris & Sons with the idea to get some Lana Gatto Super Soft yarn. I’d seen it on their website, but it wasn’t in the store. Probably just as well, as it’s not cheap.

I ended up getting Heirloom Easy Care 12ply, which was what I used for the Chunky Sampler Bag. All of which means, I could’ve quickly gone over to Mooroolbark Wool to get that, rather than going all the way into the city and making a day of it. I haven’t been able to find a 10ply wool yarn available locally, which was why I thought I’d go for the Lana Gatto. It wasn’t to be. So I’ll use 12 ply instead. It certainly worked very well for the Chunky Sampler Bag. It’ll be interesting to see how it knits up in a lace pattern.

I’m mildly interested in cryptic crosswords, so each week I’ll include a clue from our most recent “The Age” cryptic crossword.
If I can work it out, I’ll give what I think the answer is.
If not, I can laugh at the weirdness of the clue.
We never get the paper with the answers, so I’ll never know if I’m right. This may seem like a pointless exercise.
This week’s clue, from “The Age” Thursday, June 25, 2009
A firm figure put in on the first, a Tuesday (6)
The answer must be “statue”. I already had the second t from another word.
first, a Tuesday = statue
This seems to be drawing a long bow, but who’s to say how these clues are constructed.